What Is The Role of the Government in Project Finance?

In today’s article, we will talk about the role of the Government and public private partnerships in project finance.

A public-private partnership or PPP is a long-term contract between a private party and a government for providing a public service, in which the private party bears significant risk and management responsibility.

Such public private partnerships, apart from the contract, are also backed by legislation, which explicitly define the role of the parties and their obligations.

PPP as we know it today has evolved from a power purchase agreement model used to develop power generation plants in the United States in the 80s, following Private Utility Regulatory Policies Act in 1978.

Under the PPA, regulated utilities would commit for a long-term to purchase power, which enabled the finance to be raised for the power generation plant, using the PPAs as security.

A key aspect of a PPA is that the project company that builds and operates the power station does not take any risk on whether the electricity which it has the capacity to generate is actually needed: the demand and price risk remains with the utility, which pays the availability charge whether it uses any power or not.

So, the PPA model is essentially the same project finance transaction model we have developed so far in this course.

The financial players provide capital in the form of equity and debt.

The EPC contractor designs and builds the project.

The supplier supplies the raw material.

Finally, the buyer commits to purchase the product under a long term PPA. 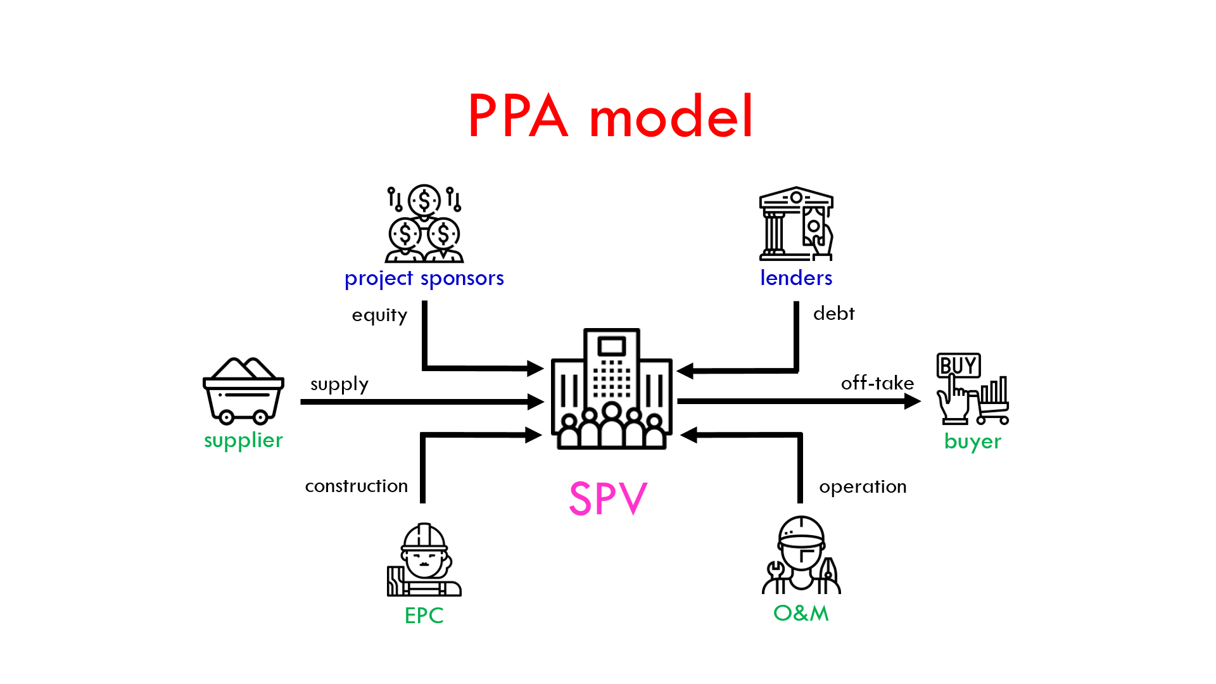 Soon, the success with the PPA model encouraged public authorities around the world to use it to attract private investments into development of social and economic infrastructure sectors.

The attraction of the private capital into many infrastructure sectors such as hospitals, schools and prisons, where revenue risk could not be borne by the private sector, required development of public private partnership legislation. And, one dominant from of PPP has emerged which is a concession agreement between the government and the private party.

The concession agreement is essentially a license given by the government to the private party to carry out investments into a particular project. It defines the length of the operation of the project by the private party, requirements to operate the project, investment recovery method, ownership, and other issues. Roughly, 20% of project financing happens in the concessions projects.

So, under the Build Own Operate contract the ownership of the project remains private. The financing of the construction costs also come from private sources. However, either government or general users pay the private party for the service provided.

Build own transfer contract resembles the BOO contract, except the ownership of the project remains private only during the term of the contract. Upon contract expiry or termination, the ownership transfers to the government.

It is usual for the project company to receive a minimum guaranteed revenue from the Government, whenever there is volume risk present in the revenue. For example, this might the case with the toll road projects, where private operator collects the tolls, and in case of insufficient revenue, the Government steps in and compensates the private operator. The whole idea is to transfer the risks associated with the project’s revenue to the Government.

In this article, we learnt about the role of the government in project finance. To learn about financial modelling for project finance please enroll in our courses: