In today’s article, we will discuss how renewable projects sell energy under power purchase agreements.

A power purchase agreement or PPA is a long-term contract between the energy seller, which is typically an independent power producer and the buyer called an off-taker, which can be a private or public utility.

The buyer is called an off-taker in Power Purchase Agreement because he takes all of the output of the power producer.

The most important terms of the PPA for a renewable energy project are:

The energy sales under the wind PPA and solar PPA are slightly different.

Under the wind PPA, the off-taker has to purchase all of the energy produced by the wind project.

Even if the off-taker does not need the energy, it has to pay the energy seller for the full amount of the energy produced.

Therefore, the PPA for wind projects follow a take or pay structure.

Note that the off-taker requires the wind farm to maintain a certain percentage of mechanical availability of the turbine, which is typically 95%.

Failure to maintain required turbine availability results in liquidated damages, which are cash penalties payable to the off-taker. The PPA will include the formulas of how these liquidated damages need to be calculated.

If the failure to maintain required turbine availability is not cured within a specified period, an event of default takes place under the PPA, and the off-taker can terminate the PPA.

Similar to the wind PPA, solar PPA follows a “take or pay” structure. The off-taker is obliged to purchase committed energy production, even if the off-taker does not need the energy.

Note that the off-taker usually requires the energy seller to generate committed energy output during the PPA’s tenor.

Typically, the energy seller has to be able to generate at least 85% of the committed energy output subject to the solar conditions at the site.

Failure to generate 85% of committed energy, results in cash penalties payable to the off-taker, and, if not cured within a specified period, leads to a material breach of the PPA.

The energy sales are calculated following a simple formula. 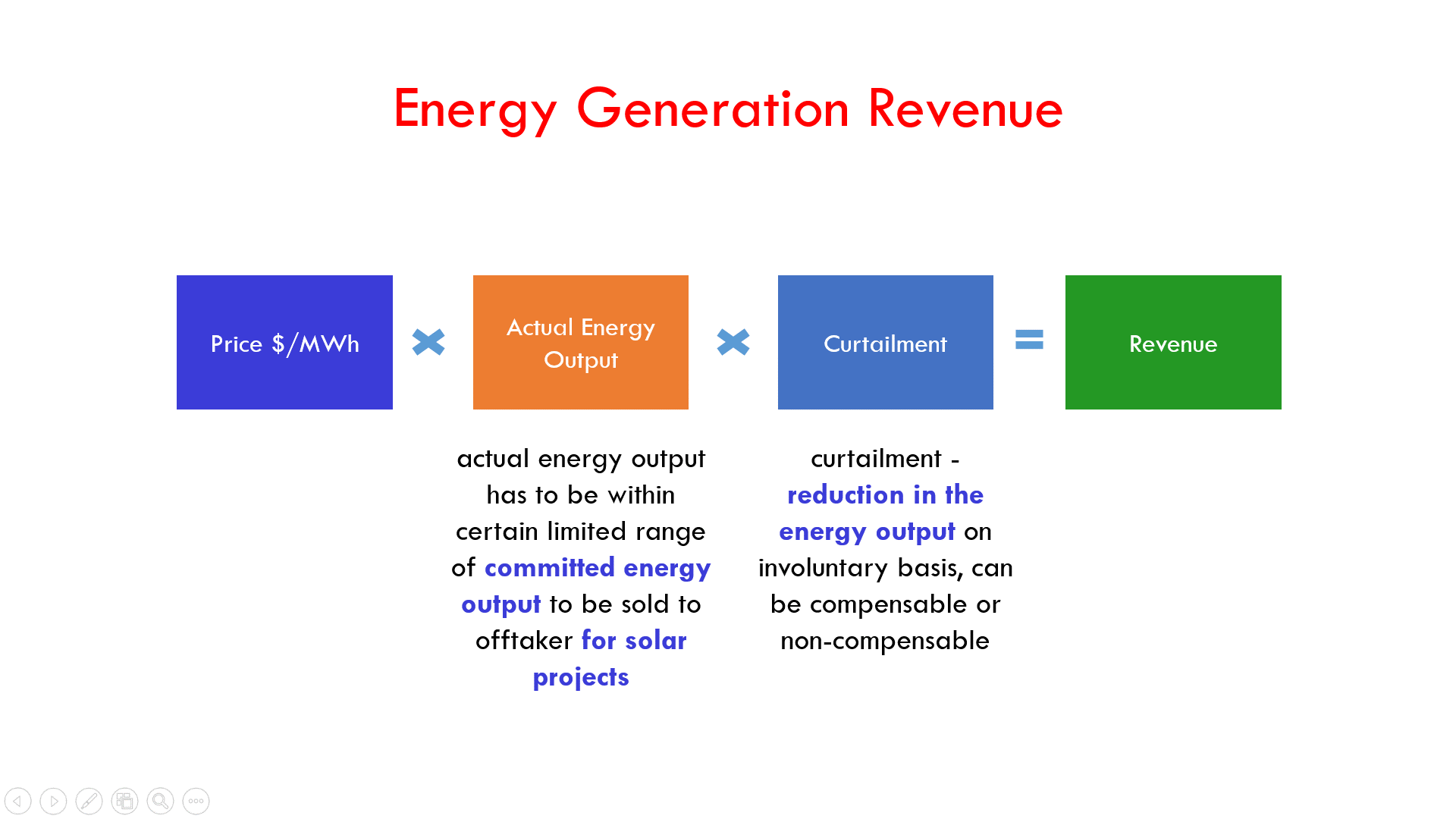 Note that for solar projects, the actual energy output has to be within a certain limited range of committed energy output that we mentioned earlier.

Curtailment is a reduction in the energy output on an involuntary basis, and it can be compensable or non-compensable.

Non-compensable curtailment happens due to events outside the control of both the off-taker and energy seller. A typical example would be power transmission grid availability due to maintenance when the grid cannot transmit the energy to the off-taker.

The energy that could have been produced under compensable curtailment is called deemed energy generation in the PPA.

And, the off-taker has to pay for deemed energy generation, as if the energy has been delivered, and such a payment is called deemed energy payment.

Let’s review an example of deemed energy generation and payment.

The question is, at 10 cents per kilowatt-hour what is deemed energy payment to a wind farm?

So, the actual generation was 25,000 megawatt-hours.

The energy price is 10 cents per kilowatt-hour, which is 100 dollars per megawatt-hour.

Now, we know how to deal with compensable curtailment, since the contract is "take or pay", the off-taker has to compensate the energy seller for the curtailment.

But, how do we deal with non-compensable curtailment?

Usually, the energy seller increases the energy price in the PPA to offset the estimated energy sales reduction because of the non-compensable curtailment.

The PPA for renewables may also include additional revenue sources or incentives.

First, PPA may include environmental attributes such as carbon credits. Typically, the off-taker also receives the carbon credits associated with the energy purchased from a renewable project.

However, sometimes, the PPA does not include the sale and purchase of carbon credits, and in such a case, those carbon credits can be sold separately.

Governments around the world have created subsidies and incentives for renewable projects. The prominent example would be Investment Tax Credit and Production Tax Credit in the USA, which have contributed significantly to renewable power development in the US power sector.

And, finally, power projects may provide ancillary services such as providing flexible generation to meet power outages or changing energy output to reflect short term variations in supply and demand.

The market has developed to procure and price these ancillary services in Europe and the US, however, renewable energy projects are not well suited to provide these services.