What Are The Risks In Project Finance?

In this article, we will be looking at the risks in project finance transactions.

As in any business venture, the project company in project finance faces 4 types of risks, these are project-specific risks, macroeconomic risks, political risks, and natural disaster risks.

And, it is an efficient and structured allocation of these risks to the parties that are most capable of managing them which makes the project finance possible. 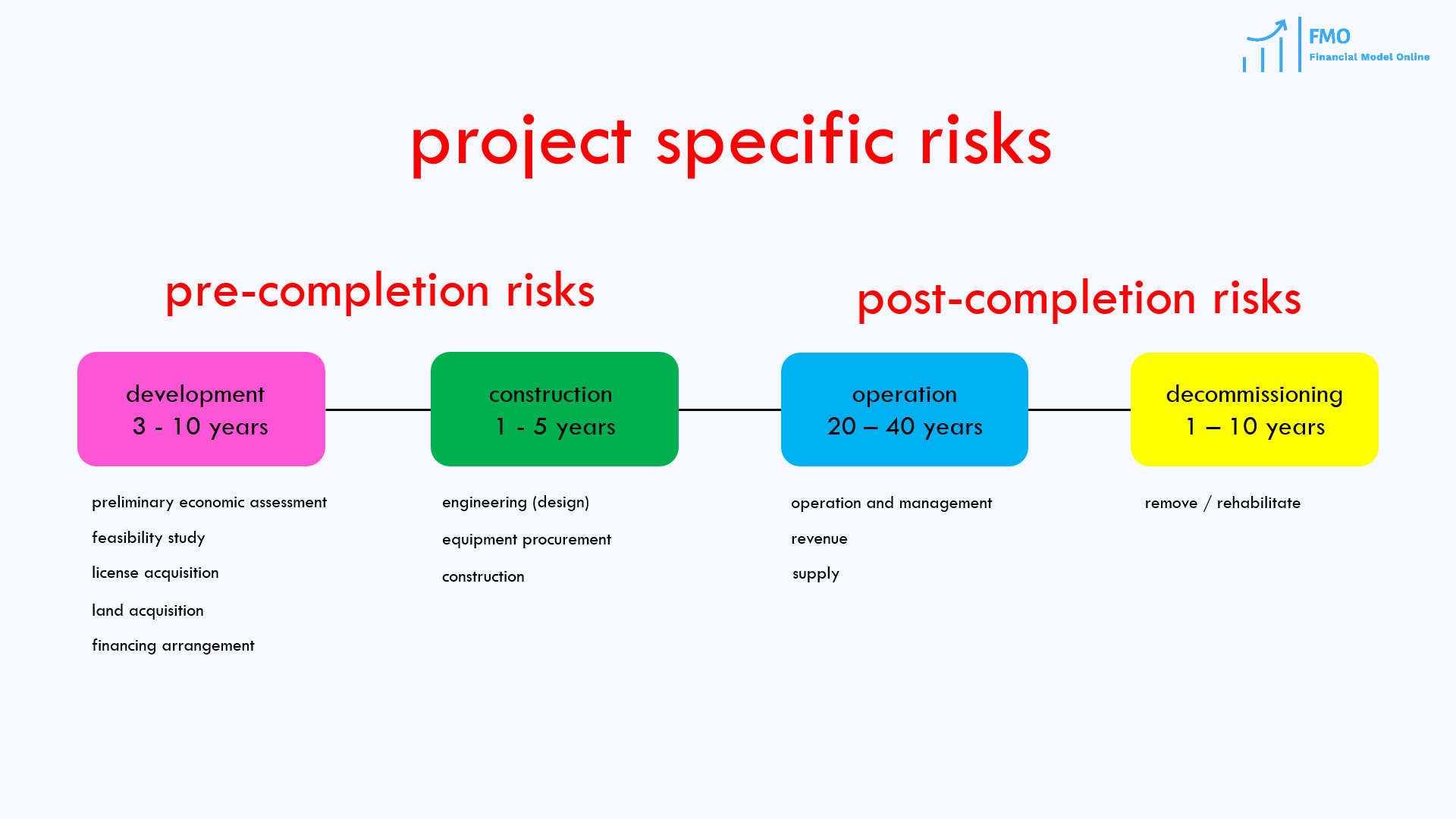 The first stage is project development when the project sponsors have to carry out technical and economic evaluations, obtain all the necessary permits, and acquire the land where the project will be built. This development stage takes anywhere from 3 to 10 years dependent on the country, industry, and project.

Next, is the stage when financing is closed and construction starts. At the construction stage, an EPC contractor designs the project, procures the necessary equipment and materials, and builds the project according to the specifications set by the project sponsors. This stage lasts anywhere from 1 to 5 years, dependent on how complex the project is.

Once the construction has been completed, and all the necessary tests have been carried out, the project enters the operations stage. At this stage, the O&M contractor takes over and is responsible for running the operations of the project.

And finally, once the project’s life is over, the project enters the decommissioning stage.

Based on the project life cycle, project-specific risks can be divided into risks that fall under the project’s pre-completion stage, and, post-completion risks. 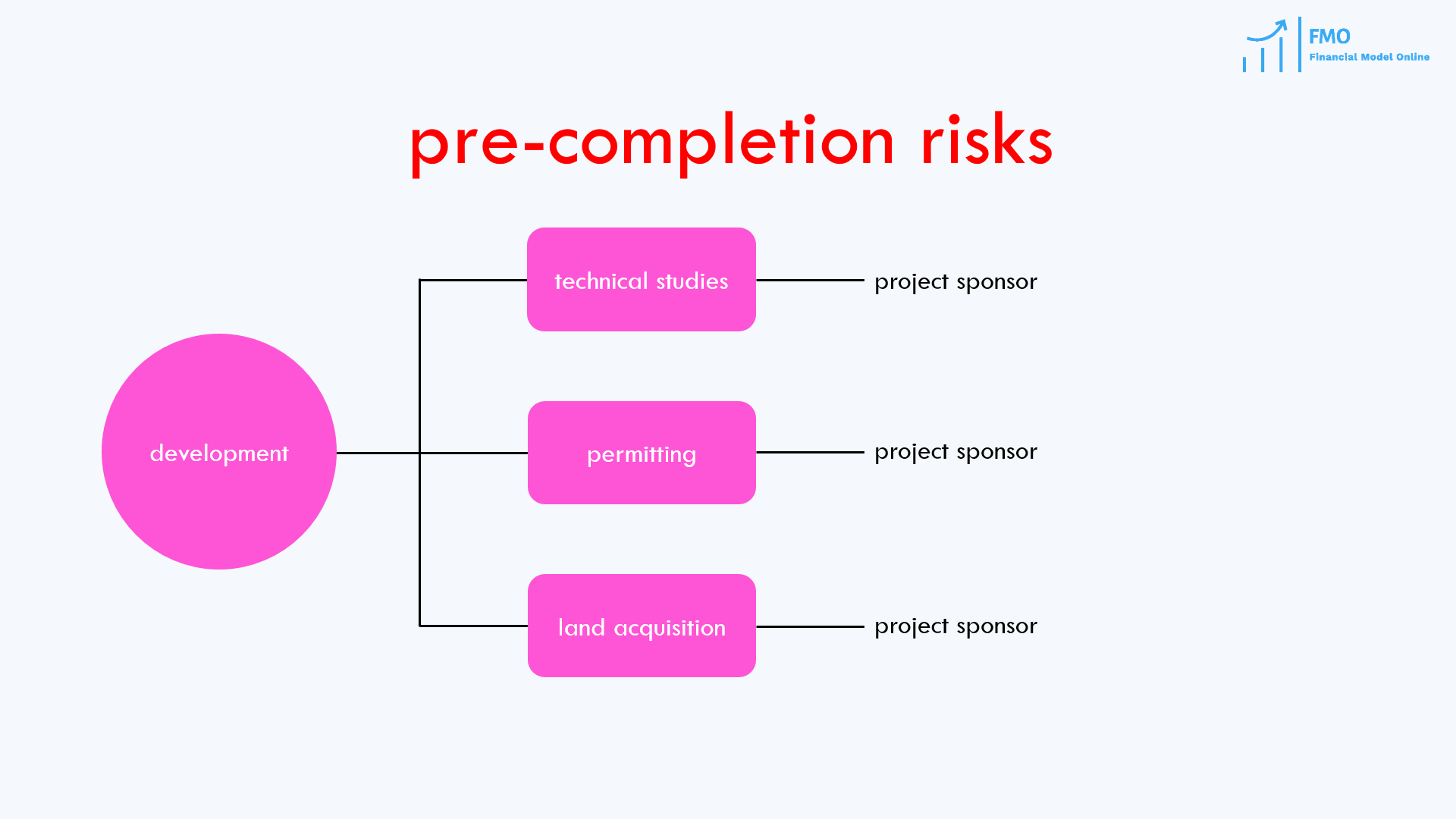 We have already mentioned that at the development stage sponsors have to carry out numerous tasks to understand whether the project makes sense, to obtain the necessary permits from the government, and acquire the land. These tasks are costly as multiple consultants will be employed by the sponsors to carry out these tasks, and, at this stage, the sponsors do not yet know if the project will be able to raise necessary financing. So, the risk is entirely on project sponsors and it is their industry expertise and project finance transaction experience, which can really mitigate the risks at the development stage.

Next, when the project enters the construction stage, there are three major risks to the project – first is the delay risk – will the project be built on time? 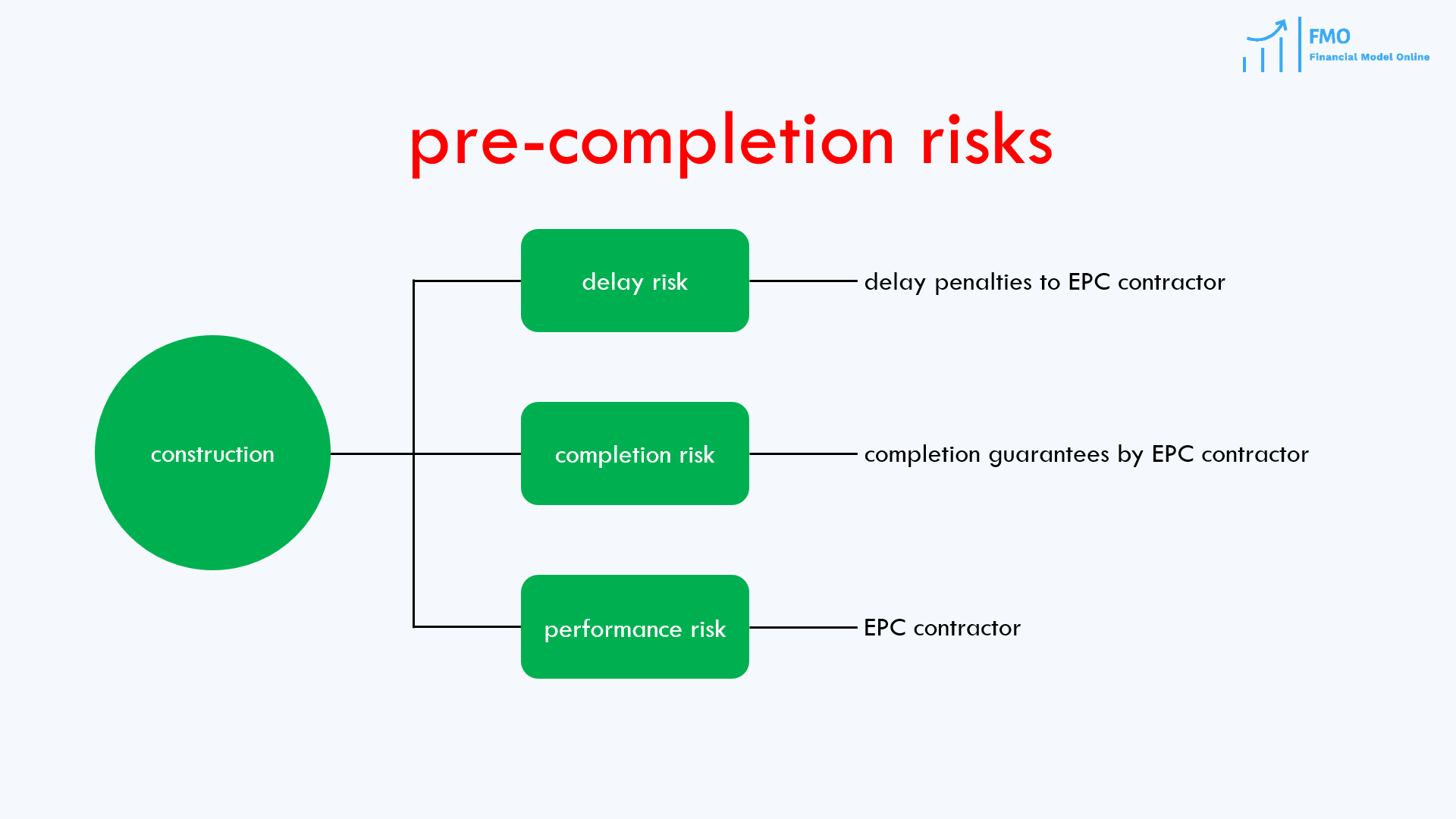 Another important risk that a project faces at construction is completion risk – will the project be built on time? Again, this is dealt with in EPC contract whereby the EPC contractor provides a completion guarantee and this guarantee is typically backed by an independent bank.

So, essentially, at the construction stage EPC contractor takes the risk under a turn-key EPC contract.

When construction is completed and the project enters operations, there are a number of operational risks. 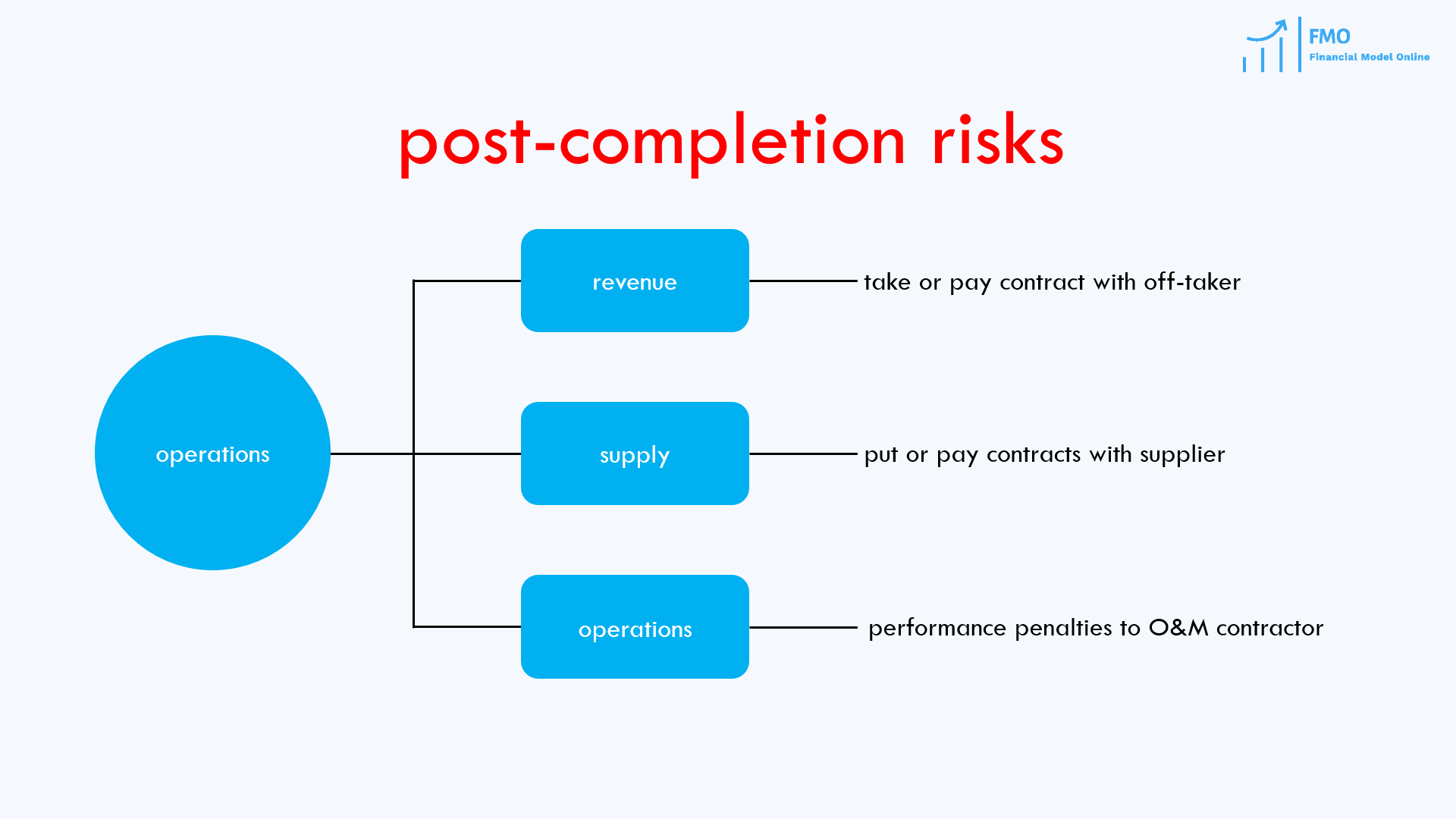 So, essentially, it is either government or sponsors and lenders that take the revenue risk, and, in the later case, the project may not be financeable. Such revenue uncertainty affects the project’s debt capacity and the cost of financing.

Next, is the risk of supply – that necessary amount of raw material will be supplied to the project at a specified price in the supply contract. This risk is managed through the “put-or-pay contracts” under which a party agrees to supply raw material for a certain price during a stated period, and agrees to pay for an alternative supply if it cannot perform. So, the suppliers take this risk. 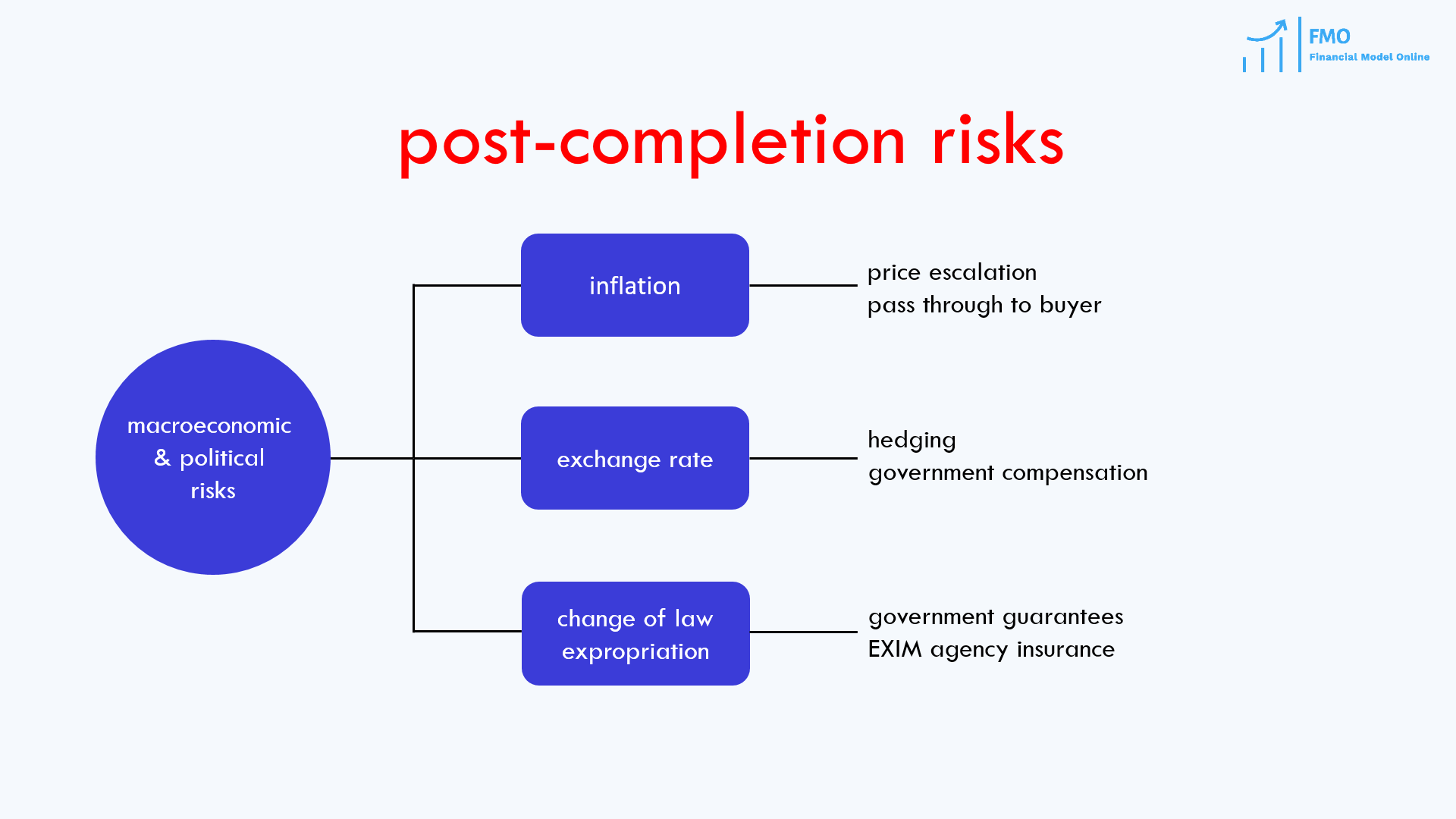 The exchange rate risk arises from the fact that financing costs are almost always in some kind of hard currency such as United States dollars but revenue is in local currency. If the local currency depreciates against the financing currency, the project company will not be able to repay the debt and equity returns. So, this risk needs to be managed.

Exchange rate risk can sometimes be hedged if the project is built in developed countries. However, if the hedging is not available, it is possible to quote the price of the product or service in a hard currency such as the United States dollar and thus avoid the exchange rate risk. Off-course, in the end, the off-taker takes the risk of the exchange rate.

Often, the exchange rate risk is taken by the government, which compensates the project company for any losses coming from the adverse exchange rate movements.

The political risks such as the risk of change of law or project expropriation risk are often taken by the host government and insurance may also be available from Export-Import Agencies, such as US EXIM Bank.

We have outlined the major risks in project finance and typical risk allocation. We can put everything together, and, analyze these risks using a risk matrix, which shows which party is taking the risk. A risk matrix is a convenient way to see that the risk is allocated to the party, which is most capable of managing it. 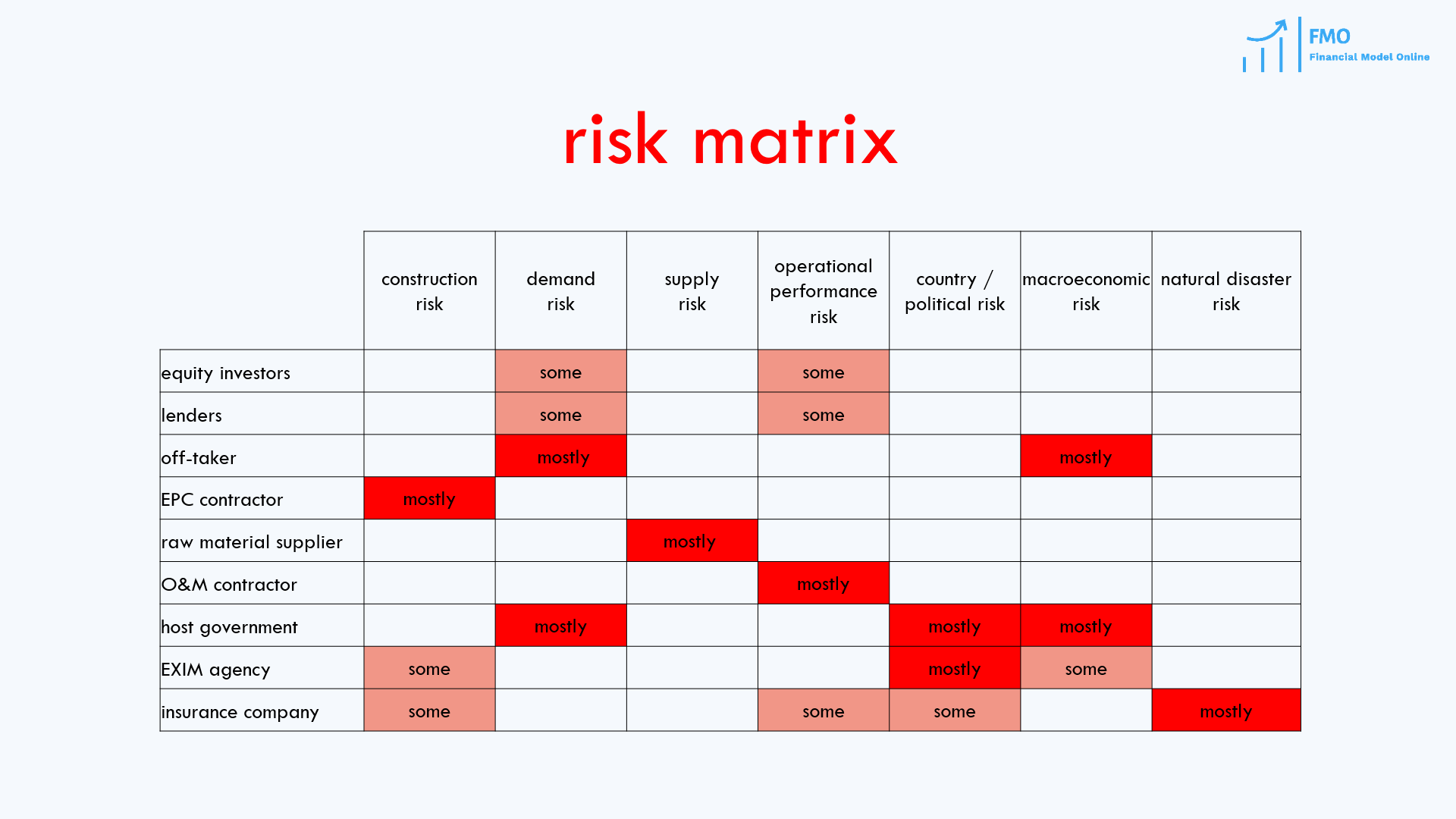 So, on top of our matrix, you can see the type of risk, for example, the construction risk or revenue risk, and on the left side of our matrix is the party to whom this risk has been allocated. You can see, for example, that construction risk is mostly taken by the EPC contractor, revenue risk is mostly taken by the off-taker, and so on.

In a perfect world, we would allocate each risk in the project to the party, which is most capable of handling it. This would allow a significant reduction of the financing cost of the project, which would eventually translate into a benefit for end-users of the product or service. However, in the real world, there are many shortcomings in risk analysis and risk allocation, which sometimes result in project failures.

To learn about financial modelling for project finance please enroll in our courses: